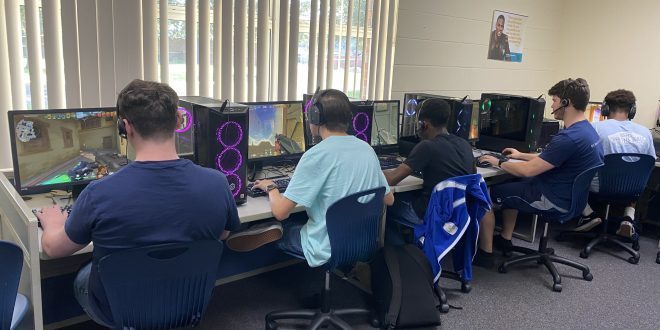 Check out the entire article HERE!

"Q.I. Roberts’ computer science teacher and esports Coach Chris Cantrell made it a priority to introduce esports to his students as soon as he could. Cantrell is a former esports pro, playing “NBA 2k” for the Orlando Magic and Los Angeles Lakers’ esports teams in 2018 and 2019, respectively.

Cantrell’s entry into scholastic esports was a little different than Neal’s. Cantrell said he knew he wanted to start an esports program at the school but did not know where to begin.

“I just spent months doing research and going to conventions where speakers were talking about high school esports,” Cantrell said.

Cantrell got the go-ahead from his administration and was able to secure 10 fully equipped gaming PCs for his computer lab. In the fall of 2021, he started the program as an after-school club, where once a week he and the students got together to play games.

“The first step was just getting kids into the club,” he said. “Getting kids who were dedicated and passionate about it.”

By the following spring, he had fielded a team in “Halo Infinite” to compete in the High School Esports League. The HSEL runs a national league meaning Cantrell’s fledgling team was competing against hundreds of others across the country. By the end of the league, it had secured top eight in playoffs and reached 6th during the regular season.

After, Cantrell said he pitched an esports class: both to better help him connect with his esports players but to also help expand his students’ understanding of esports and how it’s more than just competitive video gaming.

“Any sort of job in other fields can relate to esports,” he said. “For example, there’s managers, there’s coaches, there’s people that help you with your physical fitness, there’s all kinds of different jobs that go into esports that go into traditional sports as well.”

Cantrell is not the only esports coach in Florida who is expanding the definition of esports for his students.