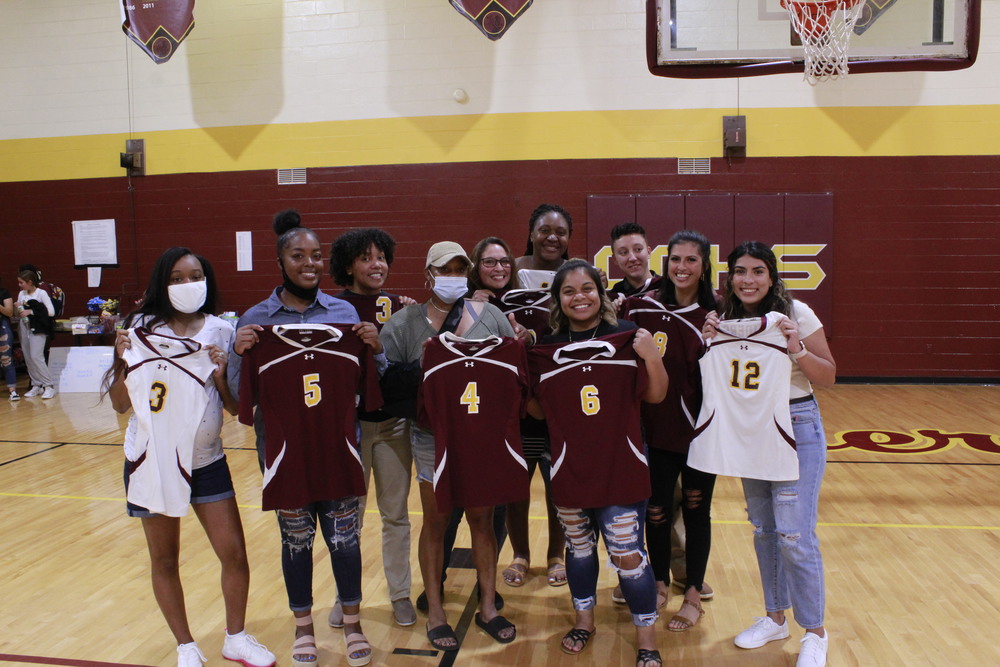 On Thursday, September 10th, at the CCJSHS volleyball game, Holly Pickens inducted two former players to the Hall of Fame and retired the jerseys of Yolanda Brady and Kayshia Brady.

Pickens began by welcoming everyone to the gym, "On behalf of Crescent City Junior Senior High School, I would like to welcome you all to the Raider Gym! I would like to say thank you to both Coach Jones and Coach Ramos for allowing us to have a few moments to honor and recognize some very outstanding young women!"

"The 2021 season marks the 10 year anniversary for our 2011 Final Four volleyball team.  This team finished with a 22-7 record. Winning the district title against Taylor (an incredible match) then winning the Regional match against Union County to advance to the Final Four."

After the recognition of the 2011 Team, Pickens had the privilege of inducting two women into the CCJSHS Hall of Fame – both honoree’s qualified for this honor by being named All American in their respective college programs.

"Our first inductee, Yolanda Simmons Brady waited 27 years to be recognized for this honor (if I calculated correctly). Yolanda graduated from CCHS in 1991. She played three years on the varsity team and held the record for most blocks in a single game and most career blocks for almost 20 years. Yolanda played volleyball at Webber College- she was selected All American and Academic All American during her junior season in 1994 in addition She was also named the team MVP for three consecutive years. Yolanda’s #9 will be retired when her daughter Morgan the current #9 graduates in 2024."

"Our next inductee is Kayshia Brady who graduated form CCJSHS in 2012.  Invite Kayshia’s family. Kayshia still holds many records at CCJSHS 1253 career kills, 402 single season kills, and 141 blocks in a season. Kayshia played college volleyball for Florida Southern receiving All American status her junior year in 2014. She was also on the Commissioners Honor Roll for 3 consecutive years and she is a member of the 1000 kill club at Florida Southern.  Kayshia’s #11 is being worn by Rosa Hernandez it will be officially retired after this season."

To end the celebration Pickens thanked everyone for the continued support of Lady Raider Volleyball, "It has been a privilege to coach each these young women.  Let the accomplishments of these women be your motivation!"