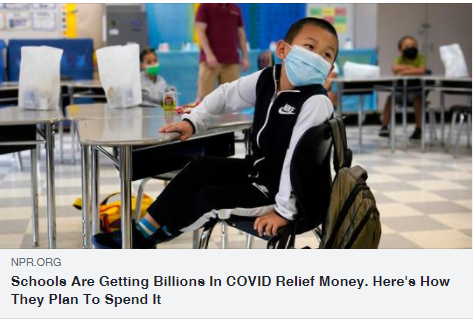 NPR: Schools Are Getting Billions in COVID Relief Money. Here's How They Plan To Spend It

Schools Are Getting Billions In COVID Relief Money. Here's How They Plan To Spend It.

"New staff, new tech and even new classrooms — that's just some of what school superintendents across the country are buying with the windfall of COVID-19 relief dollars Congress has sent their way since the pandemic began. Those are the findings of a new survey of hundreds of school leaders put together by the national School Superintendents Association, or AASA.

Before we get to the survey, though, some context:

Congress has approved essentially three big buckets of money for K-12 schools to help cover their pandemic costs: $13 billion from the CARES Act of March 2020, $54 billion from a December follow-up relief package and a whopping $122 billion from the American Rescue Plan, passed in March.

The American Rescue Plan is "huge," said Georgetown University's Marguerite Roza, who studies school finance. "It is for sure the largest one-time federal investment in public education in this country."

"This is year 26 for me in public education," said Keith Perrigan, superintendent of schools in Bristol, Va., a small, rural district on the border with Tennessee. "You can take all of the extra dollars in the first 25 years [of my career], add them all up, and it's not even close in comparison to the amount of money we received in the last 10 months."

Because the funding is being disbursed through a federal formula that preferences high-need districts, not all schools have gotten a bump. But of the districts that did receive help, the funding infusion has been historic. From the American Rescue Plan alone, qualified schools are receiving, on average, $2,400 per student, said Roza, who runs the Edunomics Lab at Georgetown.

What are superintendents spending that money on? Mitigation strategies for COVID-19 to be sure, including air filtration and testing. But for its survey of roughly 400 school leaders, the School Superintendents Association chose not to focus on this immediate public health spending. Instead, from mid-July to early August, the group asked about the investments not related to COVID-19 that district leaders are making.

"We assume that many districts are continuing to spend quite a bit of money on mitigation measures," said the association's Sasha Pudelski. "We were really interested in the investment in student learning, in particular."

Here are a few of the top-line patterns from the survey, which echo much of what NPR has heard in separate, summer check-ins with superintendents across the country:

1. Summer school: Three-quarters (75%) of respondents said they were spending American Rescue Plan dollars on summer learning and other enrichment activities.
For Curtis Jones, superintendent of schools in Bibb County, Ga., a district of roughly 22,000 students, federal dollars went toward summer school as well as other activities that helped make up for the many academic opportunities students missed during remote learning.

3. Staffing: More than 4 out of 10 (42%) respondents said they would add learning time by paying staff to work longer days and/or school years. Two-thirds (66%) also plan to add specialized staff, including counselors, social workers and reading specialists.
Response rates on this question varied little between urban, suburban and rural districts. In remote North Anson, Maine, for example, Superintendent Mike Tracy told NPR, "We're looking at hiring four new positions for interventionist teachers [this] year to deal with learning loss. So we're going to bring people in that will specifically work on reading, writing and math."

Tracy said one challenge of using COVID-19 dollars on new staff is that the money won't last forever, so he's upfront with new hires: "It's two-year money. They'll be two-year positions."

NPR heard the same from Jones in Georgia. "The No. 1 thing principals [told me they] wanted was more staff," Jones said. "And so our board was very careful with us and said, 'You can hire more staff, but it needs to be in the contract that this is a grant-funded position that runs out in three years.' And so people will be taking it, knowing that that's the situation."

4. Technology: Nearly two-thirds (62%) of respondents are using relief dollars to buy devices and/or provide students with internet connectivity.
In Texas, Michael Hinojosa, the head of Dallas Independent School District, used some of his district's earliest relief dollars to help put up cell towers at seven schools. "Now we have the connectivity that we need going forward. ... We had fiber and infrastructure, but we didn't have ways to get into the homes. And so this will help solve that problem," Hinojosa told NPR this year.

The towers provide private LTE coverage for those schools and nearby homes, and the district said it plans to expand the effort using additional COVID-19 relief funds.

5. Social-emotional learning: Slightly more than half (52%) of school leaders who responded said they would invest in social-emotional learning practices and/or trauma-informed training for educators.
This is a big one for Rick Surrency, superintendent of Putnam County, Fla., schools, south of Jacksonville. "Teenagers are social beings," he told NPR. He said the isolation of remote learning affected many students' mental well-being even more than it affected their academics. "And of course, when you have that negative social-emotional impact, you've got to deal with that before you can even tackle the academic part of it."

So Surrency used some of his federal dollars to strengthen his district's mental health safety net, spending on counselors and, because trained professionals aren't always close at hand, on telehealth access.

"I'll tell you what, it's very hard to find mental health people, especially after the 2018 [Parkland, Fla.] shooting. They were at a premium. So we're having to get creative," Surrency said.

6. Buildings: More than half (57%) of respondents said they would spend the money on renovating old school facilities or building new ones.
In Bristol, Perrigan said it would cost him roughly $48 million to renovate his three oldest schools, but just $18 million to consolidate those students and staff into one large, new school.

There is one problem though: Congress mandated that much of the money be used by late 2024, and a quarter of respondents said that timeline could be a real barrier. That's because of "supply chain disruptions, the inflated prices that we're seeing around the country, the shortage of workers, even a shortage of architects and engineers," said Pudelski of the School Superintendents Association. "There's a number of school districts around the country that are very concerned that they're going to miss their opportunity" to renovate or rebuild.

What Perrigan and several rural superintendents told NPR is that they would like to see Congress extend that 2024 spending deadline to 2026, so that districts hoping to use the money to subsidize once-in-a-generation construction efforts can have the time to do so."