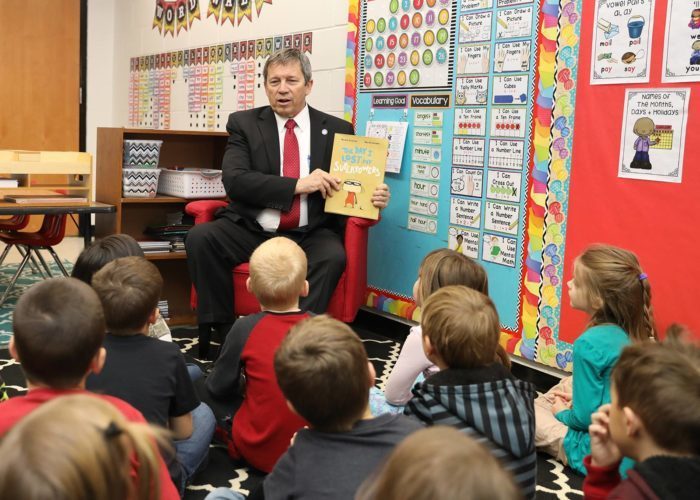 When Rick Surrency was first elected superintendent of Putnam County Schools, he set out to raise the community's expectations for its students.

Superintendent Rick Surrency faces one challenge that most of his fellow district leaders around the county don’t: running for re-election every four years.

Surrency, a lifelong educator who started out as a social studies teacher and rose to middle school principal during his career, has been voted in twice to lead Putnam County Schools in central Florida, where the superintendent is an elected position in dozens of districts.

“I had to get my message out about not being comfortable with the status quo,” Surrency says of his first campaign, which brought him out of retirement in 2016. “Because we were one of the poorest districts in the state, people had gotten comfortable saying we can’t really expect much from these kids. I had a different mindset.”

That mindset revolved around getting students the right resources so educators could raise their expectations, adds Surrency, who is a member of the District Administration Leadership Institute.

Putnam County’s graduation rate had stalled at around 55% when Surrency took over in 2016. And 11 of the district’s 18 schools had received Ds and Fs in state grading, saddling all of those buildings with “turnaround” designations.

These struggles made businesses reluctant to open up shop in the county and even led one company to cancel a planned housing development, Surrency says.

Surrency and his team started turning things around by better identifying at-risk students by the early warning signs, such as absenteeism in the lower grades and struggles in the key transition periods of third, sixth and ninth grades.

He made a priority of ensuring principals had access to this data so building leaders could intervene more effectively.

Aside from the turnaround, making schools safer in the wake of the Parkland shooting in South Florida was the biggest political challenge Surrency says he has faced during his tenure.

The state legislature had mandated that there be a gun in every school, heightening tensions around school safety in Florida and splitting Putnam County’s school board over the “highly charged” issue, Surrency says.

Because the district did not have funds to station uniformed police in its schools, Surrency developed a “Guardian program” with the county sheriff to train and arm school personnel. Now, 60 staff members, none of whom are classroom teachers, are carrying guns in the district in a program that Surrency believes puts Putnam County on the cutting-edge of school safety.

“Our employees know our kids better than anybody,” he says. “They are going to run to an active shooter whether they are armed or not.”

By 2020, the year Surrency won re-election, Putnam County’s graduation rate had surged to 90%, representing one of the highest growth rates in the state.

Superintendent Rick Surrency says he wants to leave a stronger school district for students of the future whom he may never meet.

Administrators are now developing a five-year strategic plan that is anchored by the district’s newly developed “portrait of a graduate” to drive student success in higher education and the workforce.

The profile tasks district educators with developing fearless and resilient students who are confident collaborators, communicators and problem-solvers.

The district is also expanding its CTE programs to add advanced manufacturing and artificial intelligence, and enhancing its STEM programs districtwide, from kindergarten up.

“We don’t ask kids what they want to be when they grow up; we ask them what problems they want to solve when they leave school,” Surrency says.”And if we don’t prepare students to contribute to the local economy, then we are failing our community.”

Challenges of the near future include overcoming a drop in enrollment, as Florida’s population continues to gravitate toward the coasts. Surrency has closed five schools and restructured the others as K-6 and 7-12. The district will also seek approval of a $300 million bond to build nine new schools over the next decade.

“I have the philosophy that, as a leader, I’m all about planting a seed and building a legacy,” Surrency says. “We need to think about doing things now that will benefit future students who we may not be around to see.”

Lessons of the pandemic

Superintendent Rick Surrency calls the COVID pandemic the biggest crisis he’s experienced during 43 years in education. However, the ordeal also proved more than ever the importance of collaboration between education leaders and communities.

Though districts will have to navigate divisions over masking and vaccines, COVID has also accelerated the effective use of technology. For one, teachers and students are more prepared to connect via online learning. And platforms such as Zoom have improved communication between teachers and parents.

“A lot of parents are reluctant to come into a school,” Surrency says. “Linking up electronically has removed some barriers and helped us increase parent involvement.”